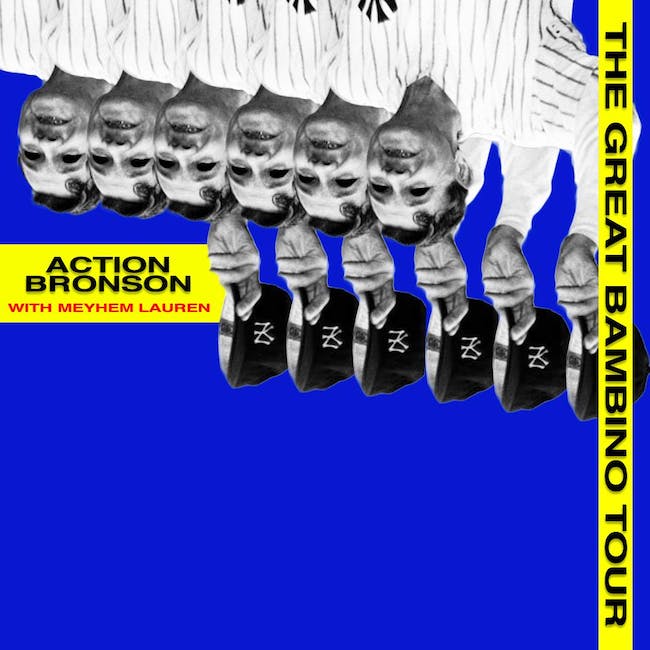 Purchase tickets to Action Bronson Friday, 2/7 at 10am!

A raunchy, cylinder-shaped ginger of Eastern European ancestry might not be the first dude you'd peg for rap stardom, but that's exactly the mantle Action Bronson is on the verge of possessing. Over the last few years, the 28-year old Queens native has become one of hip-hop's most charismatic and colorful new characters, thanks to his wicked sense of humor, a buffet of impressive releases and the rare knack for updating cherished East Coast aesthetics into indisputably modern music.

In 2011, The New York Times hailed Bronson as “one of the most promising prospects in New York hip-hop.” That formidable potential is now being realized. When Bronson gleefully tossed slabs of meat from Peter Luger’s famed steakhouse into a wild-ass crowd atthe Music Hall of Williamsburg, the mosh pit of skaters, knuckleheads, rap purists and young women was evidence of his ever-widening appeal.

Born Ariyan Arslani, Bronson grew up in Forest Hills, Queens, the son of an Albanian immigrant father and a Jewish mother from Brooklyn. He was an only child, but the population of the two-bedroom apartment swelled to as many as 13 inhabitants due to cousins, aunts, uncles and refuges from ethnic strife in Kosovo.It was in the family restaurant that Bronson developed his enduring fascination with quality eating. After studying in the Art Institute of New York’s culinary program, he took jobs ranging from busboy to sous chef. Consequently, songs in his discography often read like menu items: “Roasted Bone Marrow,” “Pouches of Tuna,” “Jerk Chicken,” “Ceviche.” Rolling Stone, appreciating the theme, described Bronson’s music as “the ultimate in comfort food, with a contemporary twist.”While Bronson was a ravenous musical connoisseur who grew up admiring artists like Kool G. Rap, Cam’ron and Mobb Deep, he never contemplated rapping himself. But a few years back, he penned a satirical song over a Southern beat CD and the results were improbably impressive. With an oversized personality, intricate wordplay and the cagy charm of an outer-borough triver, he was a natural. And after a broken leg forced him out of the kitchen, Bronson began writing seriously. In 2007, joined with Mayhem Lauren and Jay Steele to release the Last of a Dyin’ Breed: Volume 1 mixtape under the collective name “The Outdoorsmen.”Bronson’s insistent delivery and penchant for flamboyant phraseology initially drew some comparisons to other rappers, but he has long since matured beyond such superficialities. In 2011 alone, he released Bon Appetit....Bitch!, The Program EP, Dr. Lecter and Well Done.

2012 introduced collaborations with artists like Earl Sweatshirt, Riff Raff and SpaceGhostPurp, as well as Blue Chips, the brilliant street album produced by Party Supplies. In awarding the effort a lofty 8.1, Pitchfork called Bronson “one of the most hilarious and creative writers in rap” who savagely captured the essence of New York’s seedy soul: “It is what a Weegee photograph would look like now.”In August of 2012, Bronson signed with Vice/Warner Bros Records. With the leading youth media company's multi-platform power now backing him, forthcoming projects like Rare Chandeliers with Alchemist, Saab Story with Harry Fraud and Blue Chips 2 will find countless new listeners. His debut LP on Vice/Warner Bros.

Music is scheduled for 2013. For Action Bronson, this accelerating rise to greatness may just persuade him to put off “laying back, eating poutine” for a little while longer.

---After extensive national and international touring in 2014, Bronson released his debut studio album Mr. Wonderful in March 2015. The work received critical acclaim from Rolling Stone, Pitchfork, and more, debuting at #7 on the Billboard 200. To date, the four album singles racked up a cool 45m plays on Sound cloud alone. Mr. Wonderful boasts an all-star cast, from features by Chance The Rapper to production by greats like Mark Ronson, 40, Statik Selektah, and The Alchemist. Living up to the hype, SPINsaysof the project, “It's the rare rap album that actually rewards its mixtape following.