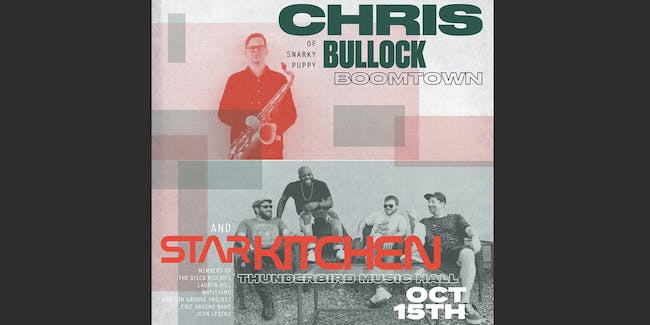 Chris Bullock is a saxophonist, multi-instrumentalist, and composer. The Snarky Puppy member has recently stepped out as a leader with the independent release of his debut record, Boomtown. This album is a hybrid of sorts. On the album, Chris has explored ways to combine his varied interests in jazz, woodwind chamber music, electronic music, and hip hop production elements. As a longtime member and composer for Snarky Puppy, he has received three Grammy awards and maintains an active schedule performing for audiences all over the world.

Chris resides in Brooklyn, NY where he balances his time leading his solo project, playing live shows with a diverse range of artists, and performing for studio sessions. Originally from Asheville, NC, Chris' musical obsession began as a child with early interests in the Beach Boys, hip-hop cassettes, and learning the clarinet and electric guitar. Over time the saxophone became central to his music making.

As a multi-instrumentalist, Chris has performed and recorded with a variety of artists including David Crosby, Michael McDonald, Lalah Hathaway, the Los Angeles Philharmonic, Charlie Hunter, Chris Thile, Eric Harland, Phish, and Soulive. In addition to his work as a live musician, Chris enjoys working with young musicians as a clinician. Chris Bullock plays D’addario reeds, Yamaha Saxophones, and Earthquaker Devices FX pedals. You can find more info at chrismbullock.com.

Star Kitchen burst onto the scene in the last year with breakout sets at Electric Forest, Jam Cruise, High Sierra Music Festival and the Peach Music Festival. They honed their sound through constant rehearsals and headlining shows at small clubs throughout the northeast. Utilizing classics and deep cuts from the last 50 years as a base, the musicians in Star Kitchen cook up improvised remixes pulling from their diverse but overlapping expertise in underground hip-hop, space funk, blues rock, psychedelic R&B and live electronic music. The band will be bringing their recipe to the south and midwest US early this fall. Over 25 other musicians have already been featured as celebrity chefs in the Star Kitchen, and this fall will feature familiar faces and new ones as the band teams up with the New Mastersounds, the Motet, Umphrey’s McGee, Galactic, Jennifer Hartswick & Nick Cassarino. Star Kitchen is Marc Brownstein, Marlon Lewis, Rob Marscher and Danny Mayer.