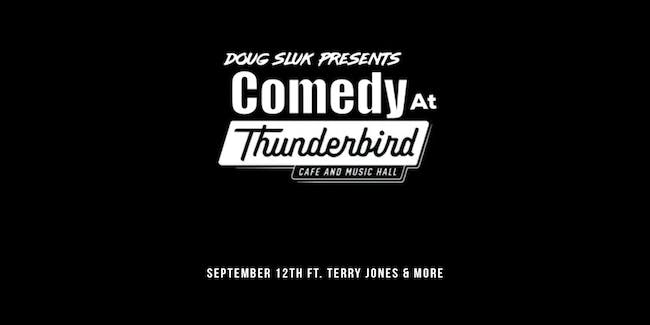 A lifelong resident of Planet Earth, Rebecca Canterbury is a new player to the comedy scene. She has recently performed at Brillobox, Unplanned Comedy Warehouse, and Giggles and Grub Club. When she’s not telling jokes, Rebecca enjoys peanut butter pretzels and repeatedly telling people that she hasn’t read The Canterbury Tales, though she did once date a guy named Chaucer. In retrospect, she would have preferred the book.

Pittsburgh transplant Daniel Ferrere is a clever and innocent comic that is just starting to see his comedy career ramp up. His genuine and endearing delivery has left audiences both laughing and feeling comfortable enough to let him date their daughter. Daniel's comedy has been described as "kind" and he himself has been described as "the after from a Queer Eye makeover". He's entertained audiences throughout the Midwest and East coast and has worked with performers such as Preston Lacy from Jackass and headlining comedians like Matt Broussard, and even has eyebrows like Adam Carolla.

Fresh out of high school, Terry Jones began doing stand-up comedy after accepting a dare to perform at the Pittsburgh Improv. With his impressions, energy, and raw talent, Terry now performs and headlines at top clubs and for corporate and college audiences throughout the country, opening for the likes of Eddie Griffin, Sinbad, Jo’Koy, Bert Kreischer, John Witherspoon, Damon Wayans and many more. Terry made his national television debut on NUVOtv’s Stand Up & Deliver Season 3 after performing at the first annual Cabo Comedy Festival and finishing as a finalist in the Jack Rollins Breakthrough Talent Competition. He has a new web series with Co-Host T-Robe called 'Light Up & Laugh' where they smoke cigars and interview special celebrity guests.

Anne Casper performs stand up and improv comedy in Pittsburgh and has two different sized feet. Her and her feet can be seen performing at venues all across the region. Doug Sluk is a comedy actor, writer, director and stand-up comedian hailing from the Pittsburgh area. He has performed sketch, improv and stand-up comedy at venues across the tri-state region including Arcade Comedy Theatre, Steel City Improv Theatre, Giggles and Grub Club, Brillobox, Hambone’s, Smokin Joe’s Saloon, The Parkway Theater, The Carnegie Science Center and The Unplanned Comedy Warehouse, where he has been the featured Mondo performer as well as the host of Stand Up Stand Ups and Comicality. He has been the featured guest on several comedy podcasts as well as being the host of one of the stages at the Millvale Music Festival and a founding member of the improv group, Jabberscotch.