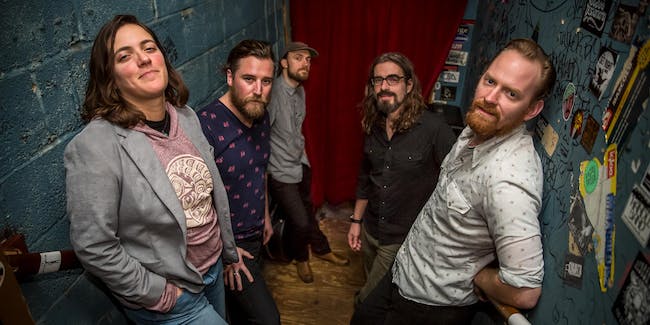 Fruition’s Wild as the Night conveys the emotions of our darkest, and sometimes weakest, moments. From the electric pulse of “Forget About You” to the echoes in “Sweet Hereafter,” a shadow of intimacy looms large over the project, with the experiences of all five band members diffusing across the album.

“For me I've just always hoped that people relate to the music, whether it's a certain chord movement that lifts their spirit or comforts their sorrow, or a lyric that speaks to them like it was written for them,” Asebroek says. “This music comes from places of vulnerability and I hope that people can take their guard down a little while resonating with it.”

Naja provides perhaps the album’s most beautiful moment in the title track, evoking the midnight grief from letting a relationship go. “Don’t Give Up on Me” carries that lonesomeness a step further, despite its seductive groove. Yet the project also illustrates the happier moments that come after dusk, expressed in imagery as simple as the storm in “Raining in the City,” or as enchanting as the campfire of “Manzanita Moonlight.”

Recorded at Silo Sound Studio in Denver, Wild as the Night captures the band’s mindset in the midst of relentless touring. “We were exhausted, but musically firing on all cylinders,” says Thompson, who shares production credit with the band on the new project. “It’s extremely diverse Americana, with a focus on great songwriting and harmonies. We weren’t going for a particular sound, just something that’s honest to our live sound along with a few tricks we learned from our last producer, Tucker Martine.”

Watching it All Fall Apart, the 2018 studio album produced by Martine, prompted Relix to proclaim it an “experiment in catharsis.” With a renewed focus on harnessing the energy of the live experience, Wild as the Night allows listeners to get a glimpse of these longtime friends doing what they do best on stage, whether they’re opening for the Wood Brothers, Greensky Bluegrass, and Jack Johnson, or playing at festivals like Telluride Bluegrass, Bonnaroo, and DelFest.

“Something that has always tied our variable styles together is the honesty in the songwriting, the attention paid toward what is genuinely and deeply catchy, not superficially so,” Asebroek says. “Vocal harmonies have also always been a unifying tool for our band. The Fruition sound has always been about being more than the sum of our parts.”

That unmistakable blend revealed itself in 2008 when Anderson tagged along with Asebroek and Naja for an afternoon of busking in Portland. Drawing on their string-band influences early on, they released their debut album Hawthorne Hoedown that same year. Thompson joined the band in 2011, shortly after hearing the band members singing together in a friend’s attic. Leonard came on board in 2015. Wild as the Night is the band’s ninth release, including albums and EPs.

“We all put ourselves deeply into every song, and we’re open to playing whatever way we deem necessary for the song, even if that means some of us playing absolutely nothing,” Anderson says. “We all love what each person brings to the table musically and idealistically. We clash too, and have tension at times, but we work through and overcome it. We are not afraid to admit we’re wrong and learn from our mistakes. And when we record harmonies, it just feels like the first time we sang together when we really fell into it, and it’s just magic.”