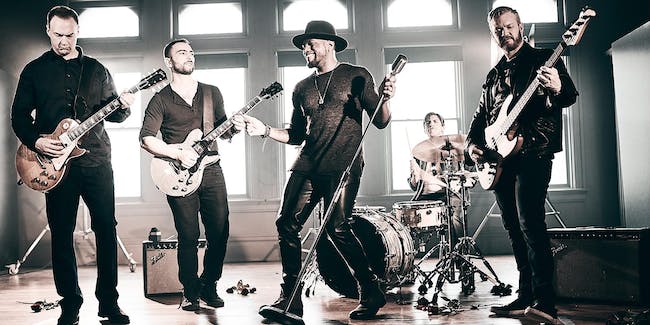 Ghost Hounds is a rock ‘n’ roll band at a time when the world needs more of them.

The band’s gritty sound reflects the blue-collar heritage of its hometown of Pittsburgh; a versatile outfit whose music fits in an Iron City barroom or a stadium — such as the one in Maryland where Ghost Hounds opened for the Rolling Stones in July. There’s plenty of energy and rock ‘n’ roll abandon, along with tight playing and intricate songcraft. The group’s new album, ROSES ARE BLACK, recalls the universal appeal of rock’s ‘70s heyday, but with a fresh, crackling energy crafted by founder and guitarist Thomas Tull, along with producing and songwriting partners David Grissom and Kevin Bowe and hall of fame engineer Eddie Kramer (Jimi Hendrix, Led Zeppelin, Rolling Stones).

“I think it’s a direct reflection of my own eclectic music tastes,” Tull says. “The Rolling Stones are my favorite band of all time, so a lot of this is inspired by the Stones. They fell in love with American blues. They have great country songs. Those things all appealed to me. Having all those different voices is important, and that’s what I want our band to have too.”

ROSES ARE BLACK certainly celebrates that diversity across its 12 tracks, voiced with fluid power by vocalist Tre’ Nation. “Bad News” spreads the good word of Ghost Hounds’ return by throttling up into some 12-bar fury, echoed later on in “Push That Rock Up the Hill” and “We Roll Hard.” “Skin in the Game” reflects that Stones love Tull speaks of, while “Black Rose” and “Fire Under Water” are classic rock tunes and “Almost Loved You” would sound at home in Nashville’s Bluebird Cafe. The group’s softer and soulful side is just as potent on tracks such as “When Your Shadow Touches Mine,” “Til It’s Gone” and “Second Time Around,” and Ghost Hounds’ treatment of “Devil Woman” shoots the Cliff Richards’ original through with high-test adrenaline, including biting guitar solos.

ROSES ARE BLACK also represents an exciting new chapter in Ghost Hounds’ nearly 15-year story — a “Second Time Around” as noted on one of the album’s songs.

Tull initially formed the band during the mid-2000s in Los Angeles, releasing a self-titled, Nile Rodgers-produced album in 2009. The group disbanded as Tull’s focus shifted elsewhere — starting a family and guiding his Legendary Entertainment to success with films such as the Christopher Nolan/Christian Bale Batman trilogy, the “Jurassic World” series, “Straight Outta Compton,” “The Hangover” and many more, along with comics, digital media and other ventures. Tull also produced, and was the creator and brainchild of the rock ‘n’ roll documentary “It Might Get Loud.” But after selling Legendary in 2016, Tull still had the desire to, in the words of one of his songs, “push that old rock (and roll) back up the hill.”

“I missed music,” Tull explains. “I missed writing. I missed performing. I missed the camaraderie of a band. I decided this was something I really wanted to do.”

Tull worked on songs last fall with Grissom — an artist in his own right who’s also played with John Mellencamp, Joe Ely, the Allman Brothers band, and the Dixie Chicks — and Bowe, whose credits include Etta James, Jonny Lang, Lynyrd Skynyrd, and Kenny Wayne Shepherd. “You have to have great songs,” Tull says. “We really spent a lot of time working on these songs. This was the first time I worked with ‘professional’ songwriters. It was a great experience working with two seasoned professionals like David and Kevin and really making everything the best they can be.” The feeling was mutual. “There are not a lot of talented people right now who are driven to write and produce rock ‘n’ roll,” Bowe says, “so to have a chance to work with cream of the crop people on a project like this is kind of a gift.”

Kramer, who knows a thing or two about what makes great rock ‘n’ roll, notes that, “Sitting there listening, it’s like, wow, they are hitting and it’s got feelings and it’s got balls, man!”

While the music was being conceived, Tull began putting together a new lineup of Ghost Hounds. “I had already written a good part of the music and knew what I wanted to do,” Tull recalls. “So then I went looking for musicians who would be equally passionate about the music. Those were the big prerequisites.” Guitarist Johnny Baab was suggested by a previous member of Ghost Hounds, while bassist Bennett Miller and drummer Blaise Lanzetta were discovered after a long search.

Baab, meanwhile, found the final piece — lead singer Tre’ Nation, via a video sent by a friend of the Texas-born Nation performing. “It was only 12 or 13 seconds long,” Tull says, “and in that moment two things were evident: Whoever this guy was, he could sing his ass off, and he had this swagger that made you go, ‘Who IS this guy?’“ Ghost Hounds “tracked him down,” and the band lineup was complete as it went in to record ROSES ARE BLACK at The Church in Pittsburgh and in Tull’s own Maple House Studios.

“I grew up singing gospel and was a gospel artist for a while, and these songs were familiar to that kind of style in a way, which makes it more fun,” says Nation, who nearly went back to college to study physics before making music a full-time pursuit. “There’s a lot of blues and rock, but we’re also exploring new territory.”

As good as ROSES ARE BLACK sounds, however, Ghost Hounds’ real strength is in playing the songs on stage. “All of these songs to me just come alive in the band’s performance,” Tull says. “We tracked every song live, and we wanted this to be, in some ways, an old-fashioned record, where you can listen to the record and then go hear the band and say, ‘Yeah, that’s the song I heard.’ There’s nothing we can’t pull off live.”

Legendary blues great, Robert Johnson, a favorite of the Ghost Hounds, finds himself a part of the band’s story. According to legend, Johnson acquired his supernatural mastery of the guitar as a young man upon having sold his soul to the devil at a crossroads in rural Mississippi. Johnson’s music is the bedrock of blues, which is itself the foundation of rock n’ roll. Johnson’s song “Hellhound on My Trail” recounts his devil’s bargain, and inspires Ghost Hounds’ name.

Ghost Hounds will be taking it on the road as ROSES ARE BLACK rolls out. And all five members are confident the energy of the album will translate into transcendent experiences for the audiences. “We’re just there to try and have fun,” Nation says. “People want to come and enjoy themselves, and we want to take them to the place they want to be. If we’re having fun then they feel it, too. That’s what this band is about.”