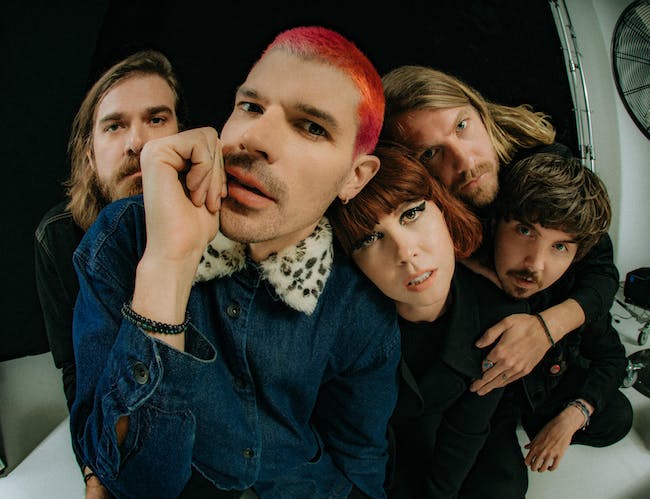 Jealous of the Birds

***** PITTSBURGH -- Due to circumstances outside of our control, we regret to inform you that GROUPLOVE has been postponed until further notice. Hang on to your tickets, we’ll email you (and post updates here) as soon as a new date is announced.*****

Jealous Of The Birds

Jealous Of The Birds

Every ticket purchased online comes with one (1) CD or digital download of Grouplove’s upcoming album, “Healer”. After your ticket purchase you'll receive an additional email in the coming weeks with instructions on how to redeem your album. US/Canadian residents only. One CD or digital download per ticket purchased online. Not valid for Fan to Fan Resale. Please Note: Not all events will be participating in the album bundle offer. Maximum of 8 albums redeemed per household.

It starts like an alarm. 'Deleter' is the lead track from Grouplove's forthcoming fourth album Healer, and it is an emergency opener. It's fuelled by pounding keys, squalling guitar lines, and lightning drumming before the voice of Christian Zucconi questions everything around him: faith systems, his sense of belonging, communities, his own psyche. “All this time I thought you were a leader/It turns out you're only a deleter.” It could be interpreted as a political statement, but it's also highly personal. “All this time been burning with a fever / It turns out I've always been my healer,” is also switched in as a rhyming line, and in the end sees Zucconi and his collaborator, wife and frontwoman Hannah Hooper realizing that amid every progression and every regression you always come back to yourself for the answers. They're already within you.

Today in a cafe in their LA neighborhood of Silver Lake, the pair sit down as two people who have experienced and borne witness to a great deal of change, trauma and growth in the past three years. You may associate the band as a beacon for positivity and optimism. They're still a five-piece – albeit with a new drummer in Ben Homola – and at their core, remain a vessel for looking at the glass half full. Hence their opening sentiment: a rallying cry for tearing down false idols and building anew.

After the band completed touring their 2016 album Big Mess, it all got tumultuous. Back in LA, Hannah had committed to taking some personal time to pursue an art show of her paintings. Just before the show and before the band started writing again, they lost a dear friend. As Hannah painted she felt connected to him, and was consumed by thoughts of death and the afterlife. All the while the left side of her body had started to feel out of her possession. “It felt like I was having a slow stroke,” she recalls. She got an MRI to be safe. The day she finished painting the show, the results came through. The news was bad – she needed brain surgery. “What the fuck?! I just went white.”

With Hannah's shocking news and the world outside feeling like it was in constant crisis, making music became the greatest remedy for the band and they started to write. They wrote more than they've ever written. Decamping to Northern California they worked on a way they never had before, experiencing a collective catharsis.

They made very aggressive grunge. “It felt good to scream,” says Hannah. “We write music as a way to deal with good times or bad.” The shows, the songs and the writing took Hannah out of a state of constant freakout.. It didn’t only help heal Hannah, but also helped heal Christian, who wasn't just a Buddha-like figure for Hannah and their young daughter, but was helping keep the band in productive spirits too.

In October 2018, the band – including Homola, guitarist Andrew Wessen and bassist Daniel Gleason – traveled to El Paso, Texas with esteemed producer Dave Sitek [of TV On The Radio] for a month. This was a shift for the band, who had previously worked almost entirely in house with founding member and former drummer/producer Ryan Rabin. Rabin left amicably prior to the band beginning work on this album. Sitek had heard 'Deleter' and loved it but he wanted to work with the band to veer away from their previous grunge-leanings. He wanted to take them outside the box and stretch them beyond what they had ever had to deal with. “It was so fun,” says Hannah. “It's like playing a sport with a new teammate. We just became better.”

Working in Texas was a head trip. “We had never recorded in a place where time did not exist, because it doesn’t exist at Sonic Ranch if you don’t want it to. We watched the sun rise every single day, I had lost the concept of time,” Andrew adds. Ben felt the same and helped set the scene in Texas: “We never missed a sunrise, listening back with the studio doors wide open, sitting around a tired fire surrounded by miles and miles of pecan trees. Hannah and I laughed uncontrollably, couldn’t even produce words, couldn’t stop crying - Were we happy or losing our minds? Haha I’ll never know.”

Not only did they learn new tricks, but Sitek encouraged them both to simplify their sound and to extend it. The songs they made during this period are so ambitious, that it pushed them to become a seven-piece band on tour. The limitations were gone. They were away from the world, immersed and unplugged in the middle of nowhere. They were also half a mile from the border and during the height of Trump's family separations crisis.

Being close to that inspired the song 'Promises.' “Nothing disappoints me like the news,” sings Christian, taking into consideration his own experience as a father. “You're just following orders, closing your eyes and telling lies while they're taking our daughters.” The track sounds like a paranoid futuristic Western.

‘Youth’ is an anthem reminding people never to forget their inner child. “When we finished Youth a group of us drove to El Paso and went grocery shopping, bought fireworks, went to a guitar shop and stopped at a food stand. We had been up for 2 days. We looked insane, we felt insane & and it was insane. But I’ll never forget how the song felt as we sped down the highway, Dave driving 150 mph, all of us just crammed in. I can literally picture it perfectly because I was so fucking proud of the song and couldn’t believe it didn’t exist 1/2 day before,” Andrew recalls.

Songs like “Expectations” and “Places” speak to the more internal and personal friction many of us feel these days. “Places’” line, “there’s a place we’re all running from, and we don’t know how to get there,” is Christian examining his experience in a constantly evolving world.

When the band got back to LA, they got in the studio with a second producer – Malay, famed for working with Frank Ocean and Lorde. They found themselves more prolific than ever, in an easier mode of creativity. Songs like ‘Inside Out’ were written and recorded in just a couple of days. Hannah remarks that the song reminds us that life is more beautiful the more honestly we live it.

“We were fortunate to collaborate with brilliant musical minds whose only agenda was to make honest and exciting music. It’s what you hope for. Malay is the perfect example of someone who creates from his inner music fan,” Dan recalls.

Hannah has always been the visual force for all of Grouplove’s art, and in June 2019, she was given the opportunity to showcase her own paintings at the legendary artist Shepard Fairey’s gallery. Now, post-surgery, she’s still recovering. But, she sees it as a gift; a way to connect with others.

It's been almost ten years since Grouplove met on a commune in Greece and brought the idea of themselves being a band back to California. They'd never have anticipated making it this far. Healer represents a re-birth and one that almost comes full circle to their initial idealism. “When we all met in Greece, Christian and I were leaving New York at an all-time low. We just wanted to have a fun summer. We wanted to make art. And we're still doing that. We found that feeling again on this album, of hopelessness put into a medium of expression.”

“This album is us fighting for that feeling,” says Hannah.” There's a darkness that's real and everyone deals with it at a certain point in their life. “We’re addressing that life is hard.  We understand and we are going through it with you.”

Purchase tickets to Grouplove Friday, 1/17 at 10am!