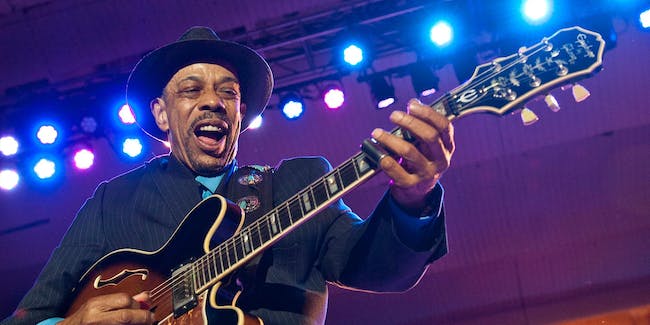 John Primer has undisputedly helped build the sound and style of Chicago blues as we know it today. The echos of tradition bellowing from the birthplaces he played such as: Maxwell Street, Theresa's, Checkerboard and Rosa's Lounges, pulse from every chord in his fingers today. John Primer is a Chicago Blues Living Legend.

John's father died tragically in Mississippi when he was young. When his mother found work in Chicago, John soon followed, bringing the sounds and spirit of Mississippi with him in 1963. He then fell for the music of both the city's west and south sides. Fronting his first band, The Maintainers, he was asked to join and eventually lead the house band at the world famous Theresa’s Lounge in 1974. Over the next seven years, John would play with such blues originators as: Sammy Lawhorn, Junior Wells, Buddy Guy, Smokey Smothers, Lonnie Brooks and many others shaping the foundations of the Chicago blues to come.