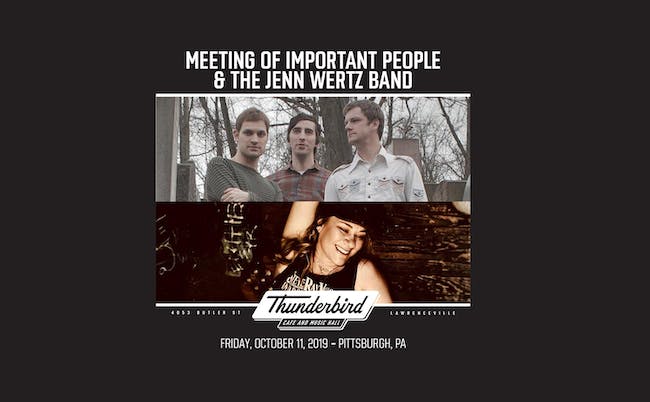 Meeting of Important People is a three-piece garage-pop band from Pittsburgh, PA. The band’s debut single “Mothers Pay More” ignited a media and blogging frenzy in the Summer of 2008, and their 2009 debut album on the Authentik label has been named a top release by several blogs and radio stations, including influential station WYEP-FM.

The band has recorded with producer Brian Deck (Modest Mouse, Iron&Wine), has starred in a heavily-viewed cardboard city music video, traveled extensively, gained airplay on terrestrial and satellite stations, and has shared the stage with renowned artists such as Ok Go, The Secret Machines, and Sam Roberts Band. Several of their songs have even been heard in high-profile television shows and films, if you listened closely enough.

Jenn Wertz is a singer-songwriter, multi-instrumentalist, and producer, perhaps best known as an original member of Pittsburgh-based multi- platinum roots rock band Rusted Root. But she is also a successful mixed media artist, videographer, and a writer.

“I stay healthy by staying creative,” says Wertz. ”It’s my meditation. If I’m not working on something, I lose my emotional and spiritual grounding.”

Growing up in the golden age of rock radio, Wertz had always maintained a great affection for the 1970’s classic folk rock-radio aesthetic. “It still has a powerful influence on me.”

It’s a sentiment that is hard to deny while listening to the songwriting and production on her new solo album.

Produced by Wertz and Dana Cannone at The Church Recording Studio in Pittsburgh throughout 2018, Take 'em as They Come is Jenn's first release in 13 years. In this 11-song collection, Wertz and Cannone successfully reimagine that 70’s feel, and set it against a modern alt-country backdrop with rich production and a very much matured, stand-out vocal style.

While her voice is recognizable as a defining element of the classic Rusted Root sound, Jenn’s personal musical style diverges from the very distinct style of that first musical family. “I brought what I could to Rusted Root, and the band had such a beautiful, really powerful collective identity, so there wasn’t always room for all I had to offer, you know?”

Wertz began her career with Rusted Root in1990, amid the budding arts movement in post-industrial Pittsburgh, PA.

“When I joined Rusted Root back then, it was something that I stumbled into, and found I had a knack for contributing in a certain way to the group dynamic, both musically and interpersonally. I think I had a natural comfort onstage and with improvisation, and that was a strength that I found early on.”

After years of touring and recording on and off, Jenn left the band in 2008. “We were so young when we started, and we toured long and hard. I even did some tours with my son on the bus. When I came home for good, I just wanted to write some things down, make art, and be with my son. I felt like my relationship with music had become strained,” Wertz laughs. “I genuinely thought that maybe that phase of my life was just coming to a close."

Except it wasn’t. In 2018 a new flood of songs and inspiration flowed into the new album.

"When the songwriting came back, like a knock at the door, I was just— oh...okay, well, come on in.” It was like the type of friend you never really lose touch with, but also all of these layers had developed. My creative expressions were informing one another all along. So, even if I’m dormant as a songwriter, it’s all connected—all of this growth and experience, even parenting. When I expand over here with my right brain, painting or being a mom, it all translates over to the songwriting. It’s a very rich inner life. I’m very grateful for that."

Central Plains is an Indie/folk/ rock band from Brooklyn, New York Founded in 2006.

Fans of the band have said “they sound sort of like a mixture of early Modest Mouse, Neil young & Stephen Malkums & the Jicks.”

Central Plains live shows have been described as having a chill, yet energetic sound, sometimes rocking out in a psychedelic, groovy way, at other times easing into an alternative country vibe when a slide guitar solo appears.