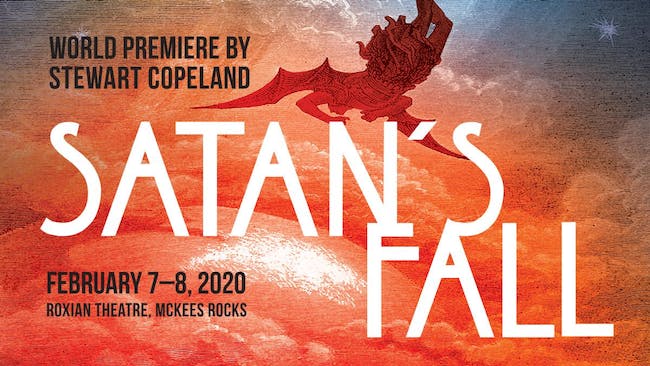 iCal
Google
This is an all-ages, fully seated show. Tickets are limited!

Composed by Stewart Copeland (of The Police)

Tickets to Saturday's show can be purchased here: http://bit.ly/SFSC2rox

The Mendelssohn Choir of Pittsburgh presents the world premiere of a new, commissioned work by former rock drummer and founder of The Police, Stewart Copeland, who has been responsible for some of the film world’s most innovative scores. Written for chorus and rock orchestra, Satan’s Fall delves into the title character’s darkness, insurrection, and eventual fall from grace as conceived by John Milton in Books V and VI of Paradise Lost.

“In the vast 17th century epic of John Milton’s Paradise Lost, there lives a story within the story,” says Copeland. “It concerns the essential prequel to the sacred tale: Why did Satan do it? How and why does Almighty God have an adversary? We get an answer when we learn of Satan’s journey to the dark side and of the mighty battle that cast him out of heaven. Such a story must be told with a heavenly choir!”

Stewart Copeland has spent more than three decades at the forefront of contemporary music as rock star and acclaimed film composer, as well as in the disparate worlds of opera, ballet, and world and chamber music.

Recruiting Sting and Andy Summers in 1977, Copeland is renowned as the founder of The Police, a band that became a defining force in rock music from the ‘80s through to the present day. His career includes the sale of more than 60 million records worldwide, and numerous awards, including five Grammy awards. Read more about Stewart.