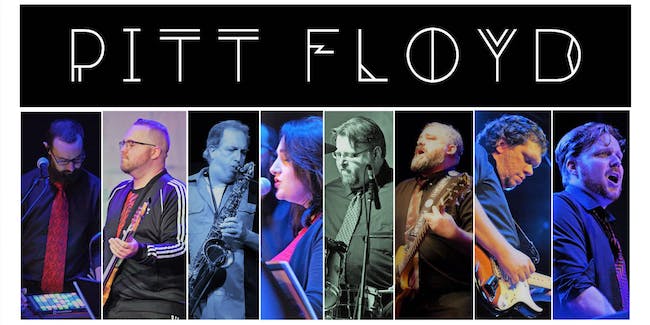 Calvin Cavalier (Bass): Calvin Cavalier has been playing bass in the Pittsburgh area for the last 12 years. He has taken the stage with jazz quintets, 50's cover bands, punk bands, and everything else in between. Calvin joined the Hambone's Theater Company bandin 2016 for “Little Shop of Rocky Horror” and returned the following year to do “The Wall” where he met up with many of this crew. In addition to this project, Calvin is currently recording an album with his band Ten Thousand Dollars Cash and plays in the house band at Mr. Small's Acoustic Cafe.

Larry Ganni (Drums): Larry had no idea that liking Pitt Floyd on social media would lead to his becoming the band's drummer, for which he is incredibly grateful. While new to the Pittsburgh music scene, Larry has spent years honing his craft and brings some old-school rock and roll energy -and volume- to the band. In addition to drums, Larry is the Host/Producer/Composer of The Guest Room Podcast, a pop-culture and existential discussion program, with perhaps too much time spent talking about Star Trek. Larry is the lucky husband of Dr. Jessica Ganni and the proud fur-daddy of Maggie and Trixie.

Erin Jay (Vocals): Erin has been singing since she can remember. She has been in various theater performances over the last 22 years. She has her masters in nursing from Walden University and is Nurse Director running a 19 bed cardiothoracic unit at UPMC Presbyterian. In her spare time she enjoys spending time with her two boys, (8 and 1.5 years old) Great Dane puppy and handsome husband.

Brian Lasinski (Guitars, Vocals): With 20 years experience playing guitar, Brian has been in numerous bands and projects in the Pittsburgh and West Virginia areas. His current acts include the Pittsburgh based Pitt Floyd and Stranger Than Steel, along with the West Virginia based Ricky Mortis & The Stiffs. He was the lead guitarist for Hambone's Theater Company production of "Little Shop of Rocky Horror" and Split Stages "The Rocky Horror Show." He was honored to return to play lead guitar and the part of The Judge last year in HTC's interpretation of "Pink Floyd’s: The Wall."

Dale Mangold (Saxophone, Guitar): Dale is proud and excited to be the saxophonist for Pitt Floyd. He has been performing music professionally for over 30 years; primarily as a saxophonist but also on guitar, bass or vocals. Dale co-hosts award-winning Acoustic Brunch at Hambone’s in Lawrenceville every Sunday. He is also involved with many fundraising events such as Annual Shalerpalooza Concert for Shaler area high school music students. When not on stage Dale enjoys hockey, baseball, playing video games and making people laugh. Proud father of son, Gabe and daughter, Sara.

Brandon Martin (SFX, Sound Engineer, Vocals): Brandon "Brando" Martin is an audio engineer and sound designer in both live and studio environments. After graduating from Full Sail University in 2011 with three degrees in Recording Arts Associates, Music Business Bachelors, and Entertainment Business Masters, Brando returned to his hometown of Pittsburgh and joined an event promotions company named Touchfaster with long-term friend, Pierce Marratto. After two years of working with Touchfaster and in his home studio, he starting working as a live audio engineer for various Pittsburgh venues, most notably James Street Gastropub for two years until its untimely closure in late 2017.

Michael Moats (Guitar, Keyboards, Vocals): Michael has been playing the guitar since he convinced his dad to let him trade in his violin for an electric six-string more than three decades ago. Since then, he has performed with several various rock, folk, blues and sea shanty bands playing guitar, bass, harmonica, keys and singing. Michael is the owner of Top of the Line Entertainment, a mobile DJ and Entertainment Company and is one of Pittsburgh’s finest Wedding DJs. In August 2017, he traveled to South Carolina to play bass with a Pink Floyd tribute band, playing “Dark Side of the Moon” during the Solar Eclipse. Michael can often be seen wearing a kilt, playing bass and singing with The Cheer’ly Men. Even though he does all of this, his 14 year old daughter still doesn’t think he’s cool.

Michael R. Petyak (Keyboards, Vocals): Having a degree in Musical Theater has taken Michael on many journeys around the world. He is a proud member of AEA & SAG-AFTRA, where he has performed on stages, television & films with performers ranging from former Broadway stars to current film icons nationally. He is a proud teacher at Lincoln Park Performing Arts Charter in Midland, PA, and is the founder of Hambone’s Theater Company in Lawrenceville. Michael would like to dedicate his work on Pitt Floyd to his late father, who introduced him to his love of progressive rock music and its importance in society.