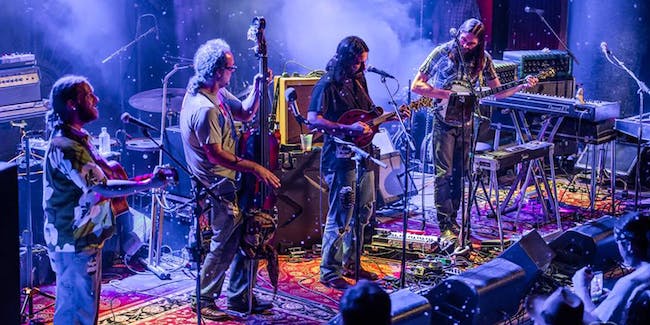 Dead & In The Way

Join us from 5pm-7pm for Front Porch Happy Hour in the cafe - drink specials and live music from Isaac Hill (of The Hills & The Rivers)!

The Rumpke Mountain Boys combine signature vocals, a unique command of string instruments (acoustic guitar, mandolin, upright bass and banjo) and dynamic special effects into a singular musical experience. An emotion filled musical stream of consciousness with no setlist, minimal structure, and intuitive improvisational flow. In this way, they summon the energy of the crowd as their guide in linking just the right music to precise moments in time.

Grateful Dead Hour host David Gans proclaimed, “One of the things I love about the Rumpke Mountain Boys is that there’s a fundamental honesty in their presentation. This is something they share with my other heroes, Donna the Buffalo and the Grateful Dead. They don’t make set lists ahead of time, they don’t rehearse their songs to a fare-thee-well-- they perform in real time. All four of them write, which is very important, and they draw songs from a tremendous variety of sources... being a musician is a life-long learning experience, if you’re doing it right, and they are.”

Like playing around a campfire, the Boys take turns calling the next tune, distilling shows from a sea of infinite notes created from years of jamming. Drawing upon a growing catalog of originals and and an ecclectic mix of covers, the Rumpke Mountain Boys blend music like a fine Irish whiskey-- the result affectionately dubbed Trashgrass. The Boys titled their 2012 album release with the same name, followed by their 2013 release, Moon, which was recorded at the famed Royal Studios in Memphis. 2016's High Time, Low Tide marks the release of their 4th self-produced album.

2016 was outstanding for the string quartet. The Boys broke new ground throughout the the country including Colorado, California, Oregon, and the Southeast. Finishing up the year with two stellar highlights, their own Snuggleween and the Rumpke Mountain Boys New Years Eve Ball in their hometown of Cincinnati.

2017 promises to be even better, with extensive touring from coast to coast and the best festival lineup yet. Keep your ear to the ground because the Rumpke Mountain Boys are rolling into a town near you!