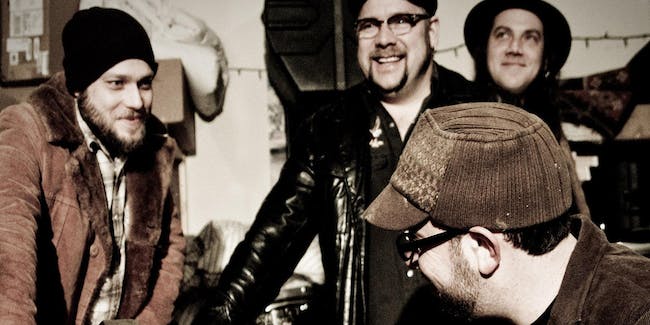 with Bonnie & the Mere Mortals and Mickey & the Snake Oil Boys

Purchase your tickets to the Sodajerk Reunion show today!

Sodajerk began in Pittsburgh with longtime friends Bucky Goldstein and Poppa John Tucker as an outlet for their shared love of 50's rockabilly, 60's country, 70's classic rock, 80's metal and early 90's college rock. They found that when they mashed the booze filled swagger of The Replacements with the tear-in-my-beer twang of Johnny Cash, something special happened....the Sodajerk sound was born.

The first record (1999's "Can't Put You Down") was almost entirely recorded by just the duo, and was greeted with warm reviews and high critical praise in their hometown, ultimately winning a spot on the Top Five Releases of 1999 by local press.

They followed with 2001's "Unhappy Hour" which continued the tradition, ending up on yet another Top 10 Releases of the Year list in Pittsburgh's press and leading to the bands involvement with festivals such as the Nashville New Music Conference and North By Northeast in Toronto. The end of 2001 brought them the honor of being chosen by Jim Beam as one of their 5 finalists in the Jim Beam National Backroom Band Search held in Nashville, of which Sodajerk ultimately placed second (not bad for some yanks!) They followed that with the release of the only official Jerk live record, "We're Going To Hell Now Because Of You Guys".

The winning streak continued in early 2002, as Sodajerk took top honors in the Grafitti Rock Challenge in Pittsburgh, a long running, yearly band competition, that in the past has seen the participation of such bands as Pittsburgh's own Rusted Root and The Clarks. This led to the recording of the bands third record (2003's "Brand New Low") which landed the band in regular rotation on such AAA stations as 91.3 WYEP. It even found its way onto celebrated singer songwriter Jesse Malin's website under the heading Fine Art: Top 25 Albums, alongside legends such as Wilco and Neil Young (were blushing now!)

The constant gigging in Pittsburgh and other cities on the east coast, plus the opportunities they've had to share the stage with bands as diverse as The Jayhawks, Charlie Daniels, The Drive By Truckers, Reverend Horton Heat, Scott Miller, John Mellencamp, Wayne "The Train" Hancock, Bobby Bare Jr., Robbie Fulks, The Red Elvises, The Tarbox Ramblers, Marah, Montgomery Gentry, and even heavy hitters such as Nashville Pussy and Static X led to Bucky and Poppa Johns desire to capture more of their live sound on the next record, which ended up being simply titled "Sodajerk", released in 2005. It's a raw rock n roll blast that immediately has found its way into regular rotation again on 91.3 WYEP (garnering 15 spins a week) and to the top of critics lists.

In late 2005, the duo relocated to Atlanta and recruited Blake Parris on bass and "Saint" Freddy McNeal on guitar. In 2007, the band released "Sodajerk 2" which was a honky tonk affair from start to finish complete with fiddles, pedal steel and dobro. Folks from both Pittsburgh and their new hometown Atlanta appeared on the record, and the band hit the road to promote it. In 2009, the band combed through 10 years of unreleased tracks to create "The Complete Jerk", a celebration of the band's first 10 years. The band also released a new record called "Songs For The Empty Handed" in 2010, which showed the band returning to it's more roots rock sound.

Whether its the rootsy blast of "Song For The Empty Handed", the twangy hook laden "Another Town" or the trip hop country masterpiece "Cow Hop", Sodajerk is a band that lives to challenge the stereotypes of all music. One Pittsburgh writer put it best, Its all you need for a night on the town.....or the end of the world!

Purchase your tickets to the Sodajerk Reunion show today!