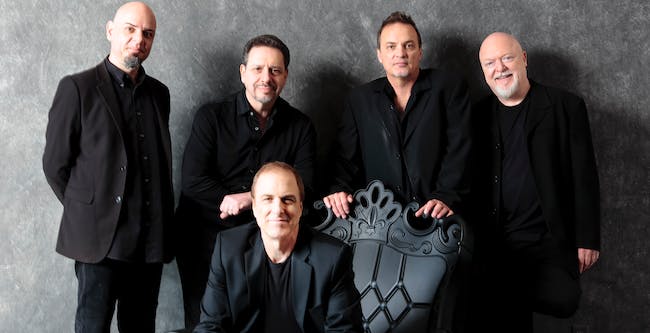 iCal
Google
This show is 18 and above

PITTSBURGH -- Due to circumstances outside of our control, we regret to inform you that THE RIPPINGTONS on APRIL 18, 2020 has been cancelled. Refunds can be obtained at original point of purchase. For more information, please visit: https://livemu.sc/2vQAUhc

Purchase tickets to The Rippingtons feat. Russ Freeman on Friday, 3/13 at 10am!

True Stories, recorded over an intensive three-month span, is a refreshing elixir that will delight devout fans of The Rippingtons and attract new ones. Joined by original Rippington, alto and soprano saxophonist Brandon Fields, drummer Dave Karasony, bassist and rhodes player Rico Belled and special guest Jeffrey Osborne, Freeman orchestrates ten compelling originals. The album opens with the hypnotic and scintillating “Wild Tales,” the CD’s first single, which Freeman calls an “experiment in randomness.” Fusing elements of jazz with traces of EDM and world influences, The Rippingtons foreshadow the journey ahead and promise it to be nothing short of exhilarating. Many of the classic Rippingtons hit repertoire prominently feature rich saxophone melodies and this time out Freeman showcases his unparalleled guitar wizardry.

On True Stories his choice of axe is a Patrick Cummings gold custom Brian Moore 30th Anniversary Russ Freeman model guitar. He plays it on all the album tracks with the exception of “Wonderland,” which features a Rosewood Fender Telecaster. The epic number transports listeners through several breathtaking, suspenseful movements that are crystallized by Freeman’s beautiful and intuitive playing. He cites this song as his favorite on the CD and you can hear the love he pours into each unforgettable moment. Amazingly, the song was recorded in one take. “I'm a big believer in first takes and stream of consciousness,” explains Freeman. “There’s something in the DNA of a first take that I find fascinating. The raw ideas are always hidden in there.” The swooning and uplifting “Sundance,” follows featuring the lyrical saxophone Brandon Fields and blues-filled and rockin’ and guitar lines of Freeman. “Sundance reminds me of the hard work of songwriting. Sometimes you have to make yourself grind it out and you get lucky. This song is perfect for the live band,” shares Freeman who will be taking True Stories on the road this Summer.

An avid traveler and lover of culture, Freeman takes us on a journey to Spain as he pays homage to the Spanish tradition of Andalusia, the southern region where Islamic and indigenous music flourish. The majestic and arresting “Flamenco Beach,” is a composition that Freeman says played in his head until he finally sat down to write it. The ebullient rocking and rhythmically charged “King’s Road,” features Freeman with Fields’ alto and Belled’s warm bass sharing the melody in unison, while drummer Dave Karasony solos over the thematic changes. Freeman shares, “This is the first time the Ripps have featured an extended drum solo on an album. I felt the time had come. I was surprised at the approach Dave took, using a combination of hi-hat finesses and double bass drum mayhem.” Another highpoint on True Stories comes in the form of the devotional “My Promise,” an enchanting song, featuring GRAMMY-winning singer Jeffrey Osborne. Freeman co-wrote the gem with his talented wife Yaredt, who has contributed several songs to The Rippingtons songbook. Reuniting Jeffrey with the band came as a recommendation from Freeman’s long time manager Andi Howard, conjuring up some of the magic they created with their unforgettable collaboration on the Thom Bell/Paul Hurtt classic “I’ll Be Around,” which was a hit for the Spinners as well as Freeman when it appeared on his 1994 album Sahara. Freeman composed the funk-drenched composition “Reach Higher,” at the piano and highlights his buttery synths and gritty guitar licks alongside Belled’s driving bass lines, Fields’ soulful sax melodies and the high-octane drumming of Karasony. Freeman confides, “I'm a guitar player by trade, but I spend most of my time playing keyboards!”

“Dreamcatcher” is ethereal and wistful and “Golden Child,” is a blues fueled number with stop-time rhythms that will have you dancing before you know it. In typical fashion, The Rippington’s leave us with something to remember with the album’s unforgettable title track. It is a divine, dramatic, impressionistic and contemplative track that highlights Brandon Fields’ sublime soprano and a wonderful piano solo from Freeman. “I’m so pleased to have Brandon back with The Ripps,” says the guitarist. “Our collaboration precedes the band going back to my first solo album. Our communication is effortless and I am amazed at how he is able to always interpret my melody writing.”

Devoted fans of the The Rippingtons are well acquainted with the band’s beloved, spunky and funky mascot, the jazz cat, who has graced all 22 album covers.  “I love the outlandish graphics which were intentionally calibrated. I was specific about wanting octopus tentacles for the jazz cat and gave designer Bill Mayer the backdrop of 40s era comic books, preferably set to the landscape of Mars, “laughs Freeman. Now who said jazz has no sense of humor?!

“Musical inspiration is a triage of sonics, melody, and visual reference,” states Russ Freeman. His approach to composition is similar to that of a mixed-medium painter, in which he engages all the senses and employs disparate techniques. Hurling unique instrumentation, wide-ranging dynamics and contrasting textures upon his auditory canvas, he pushes the boundaries sonically, harmonically, rhythmically and emotionally. Freeman, who got his big break early on as a composer, understands how important the right elements are to create the perfect musical climate. In fact, Freeman and the Rippingtons have been known to work with The American Association of Music Therapy to conduct clinics in therapeutic settings, using their music as a therapeutic tool.

The Nashville born, LA based guitarist began studying classical guitar at age eleven and picked up the guitar four years later.  Such iconic players as Larry Carlton, Wes Montgomery, George Benson, Paco de Lucia and James Taylor, among others, have influenced Freeman’s own distinctive style through the years. “I have always attributed the band’s success to our loyal fans,” says the humble maverick. A testament to Freeman’s Midas touch and the reverence his peers have for him is the who list of stars who have been featured with The Rippingtons through the years. Some of those artists include vocalists Patti Austin, Jeffrey Osborne and The Whispers, pianists Bob James, Joe Sample and David Benoit and saxophonists Kenny G, Jeff Kashiwa, Paul Taylor and Kirk Whalum, to name a few. Freeman’s dynamic and adventurous compositions have long been a centerpiece of The Rippingtons’ signature sound. “Once I learned to free myself from self imposed constraints, I found new ways to express ideas musically,” explains Freeman. The Rippingtons’ irresistible auditory confection has catapulted their albums to the top of the charts time and time again. In fact, virtually all of their recordings have hit Top 5 on the Contemporary jazz charts and several have landed #1 albums including Welcome To the St. James Club, Curves Ahead, Tourist in Paradise, Sahara and Black Diamond.

“I try to always respect the limited time we have, and treat each day as the last,” shares the visionary and virtuosic guitarist, keyboardist, composer and producer. This mindset, spiritual grounding and deep understanding of how to operate in gratitude, has allowed the multi-instrumentalist to explore the realms of possibility, making him a pioneer in the music game. Russ Freeman has made a name for himself defying the odds and redefining himself every step of the way and he’s not done yet.

True Stories is a testament to the unwavering artistry of Russ Freeman and The Rippingtons and confirmation that there are still many more tales to be told. “I’m trying to reach for a place I have not been. I’m looking for inspiration. I never look back. ”It is this forward momentum that propels the notes on True Stories and keeps the listeners yearning for the next chapter.

Purchase tickets to The Rippingtons feat. Russ Freeman on Friday, 3/13 at 10am!