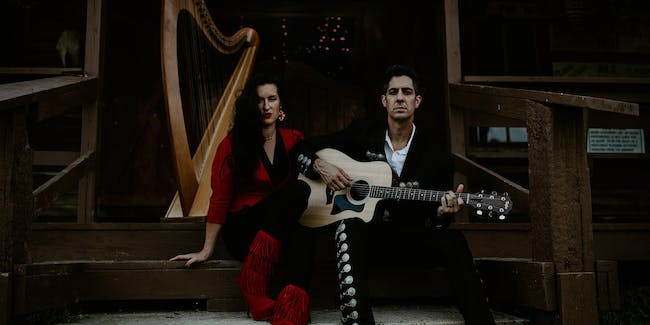 Purchase tickets to The Stapletons today!

The Stapletons are a husband and wife, harp and guitar duo based in Pittsburgh. Together, they write storytelling baroque folk rich with hints of balladry and the blues. Original harp and guitar arrangements and ethereal vocal harmonies combine to create a wondrous sound. This summer, they hit the road on a trip across America in a 31 foot RV with a harp, 2 guitars, and their 4 children to promote their new Wild West album, Thieves and Dreamers.

The album features Celtic harp and 12 string re-envisioning of classic and forgotten songs of the American Wild West, including Shenendoah, Streets of Laredo, and the ballad of Jesse James. Their performances will include storytelling and song.

During their research into the songs and stories behind them, The Stapletons learned that the original route of Lewis and Clark and many of the early pioneers began in Pittsburgh, where the Allegheny and Monongahela rivers meet to form the Ohio. Their journey will recreate these pioneer pathways with a series of concerts on their route from Pittsburgh to the Pacific. The Stapletons will also be filming a documentary of their journey.

The Stapletons will complete their tour with an Album Release performance in Pittsburgh at the newly renovated Thunderbird Cafe & Music Hall on Aug. 17, 2019. Doors open at 7 pm. Tickets are 10/advance, 12 at door.

Listen to the advance single from the album, Jesse James, here:

Purchase tickets to The Stapletons today!