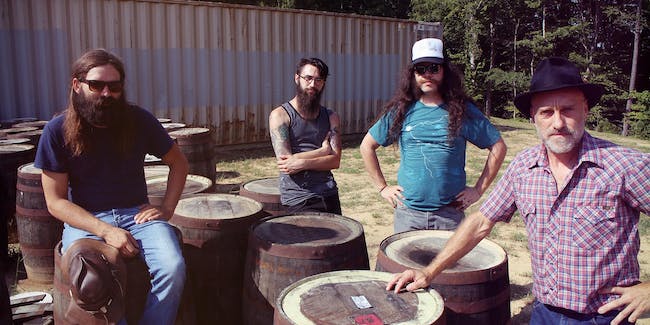 Register for The Hackensaw Boys today!

For almost two decades, the Hackensaw Boys have plowed the asphalt bringing their raw, gritty American vernacular sounds to the music halls and streets across the world. Twenty years later, the group continues their burning hot vision of American roots music into a new age, fueled as much by a rowdy punk spirit as by the traditional masters that first inspired them.

The music began in 1999 when four friends from Virginia’s beautiful Shenandoah Valley found their collective ways to the roots music hub of Charlottesville. They didn’t waste time getting going, playing a show on the street the day of their first practice. The group let the good times roll and started adding like-minded people until their ranks reached twelve players for their first US tour. As with the folk and punk traditions which form the foundation of their sound, they’ve always operated more as a collective than a band. Helmed by founding member David Sickmen, the Hackensaw Boys have always had more in common with bands like The Clash, who celebrated the working class roots of their own music, than they did with an overly-polished Nashville mainstream sound.

Throughout the 20 years of the bands existence Hackensaw Boys have had the pleasure of sharing the stage with many amazing and diverse artists, such as the Avett Brothers, Old Crow Medicine Show, Trampled by Turtles, Rambling Jack Elliot, Cake, Cheap Trick, De La Soul, and many more. Once, they even served as legendary country singer Charlie Louvin’s backing band for a tour. The band’s most recent recording, Charismo (2016), was produced by Grammy award-winning producer Larry Campbell (Bob Dylan, Levon Helm, B.B King) in upstate New York. Thankfully, there’s no sign of the band slowing down anytime soon. Currently, the band has brand new studio material in the works and many shows lined up in Europe and the U.S.

The coming year, 2019, is shaping up to be a fine year indeed and whether listening to one of their studio recordings or witnessing a live performance, one thing is guaranteed: a first-rate time will be had by all.

Register for The Hackensaw Boys today!