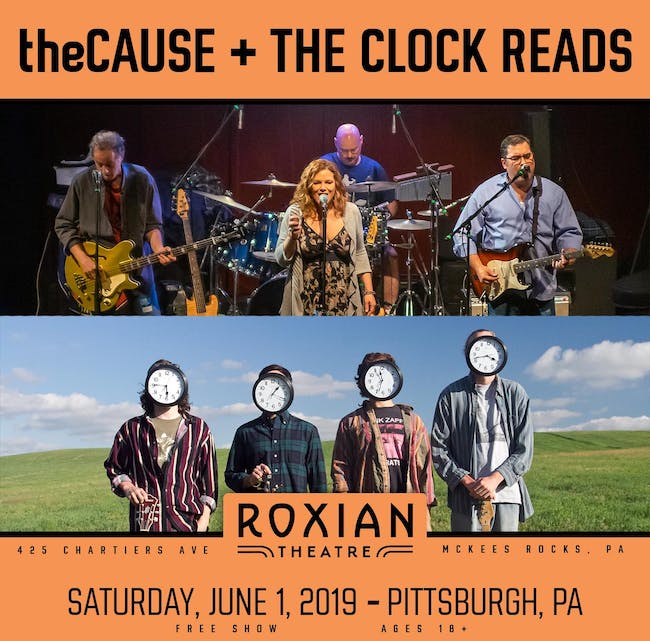 theCAUSE with The Clock Reads

Reserve your tickets to theCAUSE and The Clock Reads!

theCAUSE is a band consisting of 4 Pittsburgh musicians who have all been around the proverbial block. Playing tunes from Grateful Dead, Phish, The Beatles, Bob Dylan and MORE, including some very tasty originals, theCAUSE packs a punch while still paying close attention to the delicate touch. The players are Eric "Pappy" Weingrad on guitar and vocals (Double Dose, Pappy's Blues Junction), David Tauberg on bass and vocals (Powers Run Band, Hard to Handle, Cherylann Hawk), Mike South on drums (Left for Dead, Sticky, Russ Lauf Band) and, joining us in 2008, Pittsburgh blues veteran Jill Paone Simmons brings a whole new dimension to theCAUSE on vocals and continues to rock with us today.

We are beginning the practice of performing an annual show where we pick a Grateful Dead concert from 1965-1995 and attempt to recreate the entire setlist. This has, of course been done by countless Grateful Dead cover bands, and we figured once a year would be just fine for us. These shows will be announced about a week or two before the performance and, in true fashion, the show's original date will not be announced until we finish playing it (or someone guesses correctly while we're playing!)

Also, you will see theCAUSE appear as REUBEN'S PAINTED MANDOLIN once or twice a year. When we announce a show under this monicker, prepare yourself for a full evening of material from the JERRY GARCIA BAND repertoire. It's always a great time.

Reserve your tickets to theCAUSE and The Clock Reads!